‘I GLORY IN THE LORD’

email Rex Woodmore
1 Corinthians 1:31 “He who glories, let him glory in the Lord”         ​
‘I GLORY IN THE LORD’ by Rex Woodmore 2015 (Refreshed Dec 2019)
It’s an honour to glory in what the Lord has done in my life.
1 Corinthians 1:31 “He who glories, let him glory in the Lord”
When talking about oneself, it’s difficult, to avoid those selfish words ‘I’ & ‘Me’
​If you think I’m boasting- then you’re right! …But my boasting is not of me.
I boast or ‘glory’ of how, even before I acknowledged Him, the Lord cared for me, protected me & on several occasions saved my life, from a physical death. If I had died, I would have perished in Hell.
​But in 2 Pet. we see The Lord is longsuffering towards us & not willing to see any of us perish, but that all should come to repentance.      ​ 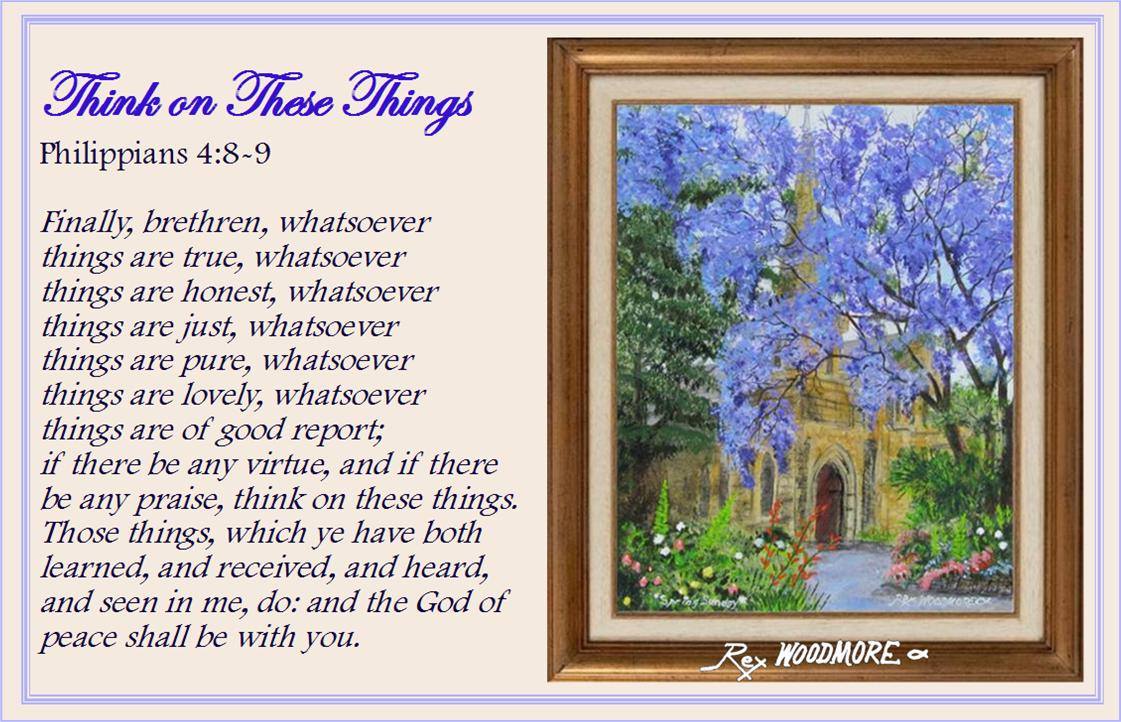 PAINTING & POEM BY REX WOODMORE
My story goes from a simple knowledge of God, to a relationship with God.
​ For 45 years I was aware of Him, but I made no effort to get to know Him.
Revelation 3:20 Behold, I stand at the door and knock. If anyone hears My voice and opens the door, I will come in to him and dine with him, and he with Me.
Eventually after many years, I thanked The Lord for His love, grace & mercy. I came to repentance and accepted Jesus Christ as my Lord & my Saviour. Once again, He saved my life, but this time, it was from an Eternity in Hell. Praise God! My sins are forgiven - I am a New Creation in Christ.
2 Corinthians 5:17 Therefore, if anyone is in Christ, he is a new creation; old things have passed away; behold, all things have become new. ​
As human beings, created in God’s image, we each have value, meaning, and purpose in the plan of God. I have no doubt God uses the influence of others to make each of us a unique individual. In my story, I must include my earthly Father & others (unbelievers & believers) who served God’s purpose in making me what I am today. But I don’t glory in what they did, because compared to that of my Heavenly Father, their contribution is of no significance.
For God so loved the world that He gave His only begotten Son, that whoever believes in Him should not perish but have everlasting life. John 3:16         ​ ​

Kenya
​    When we arrived in Kenya, it was the start of what became known as the Mau-Mau uprising between 1952 & 1960 involving the Kikuyu people who coerced servants, cooks & labourers, to murder their white employers.  Today most Kikuyu claim to be Christian. But back then, while swearing allegiance to the Mau-Mau, they drank blood in a satanic ritual.
I’m sure it was no coincidence we were in Kenya at that particular time.
Both Mum and Dad, who spoke fluent Hindustani & French, also spoke Swahili, the most common language of the Kikuyu people & the Mau-Mau.
In Kenya Dad slept with his revolver under his pillow. One night intruders stole the clock from beside Mum & Dad’s bed. We awoke to our African cook shouting in Swahili ‘Bad men Bwana-Bad men’. Dad, the ‘Bwana or Boss’ leapt out of bed & fired into the bush after the ‘Bad men’. It was a moonlight night, so Dad was able to identify one of them in a police line-up. He had been arrested for the murder of another white couple. From then on, our mud brick house, in the midst of Banana palms on the edge of the jungle, was booby trapped with strings tied to tin cans. If they rattled in the trees, the resident family of noisy monkeys would have soon awoken us with their screeching.  ​
My school in Mombasa, with its flowers & trees, was the only school I liked.
My next school in England, with its stone walls & iron gates, was like a prison.   ​
​         My teacher sent home a note for my parents. Apparently, I’d been telling lies, all sorts of nonsense, like having seen the pyramids in Egypt and monkeys in Africa. In my defence, Mum gave a talk to my class about our adventures, showed them our souvenirs and Dad’s black & white, family photos.
​ I wasn’t into pain, mine or other peoples, so from then on I used diplomacy.
I talked my way out of trouble or I ran. A punch was my last line of defence.
In Matt 10:16 we read ..In the midst of wolves... Be wise as serpents and harmless as doves.
​     In Australia, life was very different for us. We became regular Church goers.

We went once at Christmas time & once at Easter. In the first year in Australia, Mum & Dad looked after aboriginal boys at the Kenwick branch of Sister Kate’s home. Here I began to go to Sunday school (I say I ‘began’ because I never actually got there). I was sent off with the Home boys to walk the mile down Royal Street, but when we got to the local church, the boys kept on walking.
I had no desire to go to school on a Sunday (or any other day for that matter) so I willingly followed them to the shop around the corner, where with the threepence, that we each had for the Church collection money*, we bought ice-cream and lollies. Soon afterwards Mum received a call from the Church asking why she hadn’t sent the boys to Sunday school.
​The Canning River was on the boundary of the home. I enjoyed swimming, canoeing & learning about the bush from the aboriginal kids. These happy brown faced Aussies, were my first real friends. Perhaps had I gone to Sunday school I would have recognised Jesus as my friend.
Proverbs 18:24  A man who has friends must himself be friendly, But there is a friend who sticks closer than a brother.
​Dad bought a property in Jarrahdale. My brother 5yrs my senior, preferred to board with people in Kenwick & continued to study at Kent St High School.

Our orchard was 5miles from town on 7 acres. The house was an uninsulated wooden shed with no electricity. Our water came untreated from the creek & there were no neighbouring kids to play with (but that was nothing new for me). Surrounded by Jarrah forest, I was happy & content in my own company.
The Apostle Paul said in Phil 4:11 ‘’I have learned in whatever state I am, to be content”
​I have wonderful memories of Dad teaching me to fire a rifle, trap rabbits, and other bush skills (that I now appreciate) but where to prove, of little use in the middle of Hay Street, Perth, in my first job as an Apprentice hairdresser.
One message that made an everlasting impression on me, was that God made the birds, animals, trees and all the amazing things, I had experienced in forests, jungles, deserts, beaches & mountains around the world.
At 10 years old, I had seen so much of God’s creation to be thankful for.   ​
Perhaps it was the start of my acceptance of things by faith when, while trying to fathom the beginning & the end, I came to the conclusion ‘It is-what it is’
​Now I believe through His Creation Jesus was saying to me ‘’I Am-That I Am’’
Revelation 1:8 “I am the Alpha and the Omega, the Beginning and the End,” says the Lord, “who is and who was and who is to come, the Almighty.”    ​
I sat trembling as the Adrenalin wore off, and realised something inexplicably special, had happened - God heard me & saved me! I have been back several times-I am amazed & believe only God, could have lifted me over that ledge.
Psalm 34:4 I sought the Lord, and He heard me, And delivered me from all my fears.     ​
You won’t need much convincing when I tell you: “I have a mental problem!” Thanks to Google I now know I have Dyscalculia, which is to numbers what Dyslexia is to words. In Kenya it’s linked to childhood Malaria, which I had a serious dose of while I was there. If a kid can’t grasp numbers, then he fails miserably (as I did) in Maths, History, Woodwork, Metal work, etc, etc.
They all use numbers in calculations, measurements, historic dates & so on.  ​
​[Now, what I am about to tell you, I’m sure you will not immediately believe,
I expect you to be like my doubting English, School teacher.
However, before you get the school bullies onto me, please hear me out]

I desperately wanted to leave school, but I needed guidance to find a job.

I praise God for filling that void & glory in what He has done in my life.

Thanks for reading my story.  All glory to the Lord. Amen! 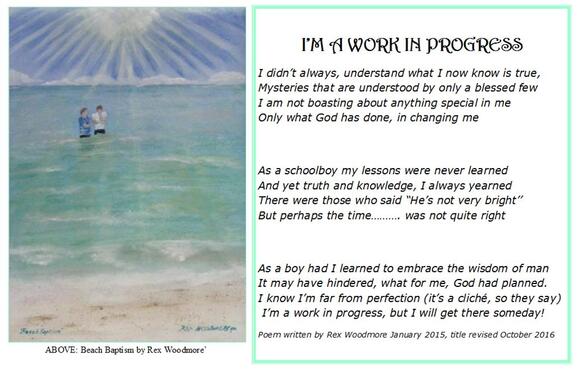