FLOWERS FADE - BUT THE WORD OF GOD LASTS FOREVER! 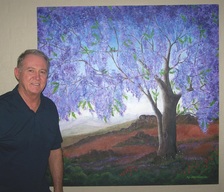 Rex Woodmore with Jugan Jacaranda
JACARANDA FLOWERS
One of my favourite subjects in my paintings is the beautiful Jacaranda tree.


Thanks to Sharon Rule in assisting with the word ‘Jugan’ which in her traditional Australian Aboriginal language ‘Ngadjumaja’ means ‘Standing’.

The shape of the Kangaroo paw (Anigozanthus species) flowers is similar to the front paws of a Kangaroo. In the flowers the position of the pollen-bearing allows pollen to be deposited on the head of feeding birds. This pollen is transferred from flower to flower as the birds feed. Different species usually deposit pollen on different areas of the birds' head. This means that pollen from one species is unlikely to be deposited in the flowers of another species.

The flower heads are made up of hundreds or thousands of tiny individual flowers grouped in pairs. The colour ranges from yellow to red. Many species flower over autumn and winter. The fruits of banksias (follicles) are hard and woody and are often grouped together to resemble cones. The hard fruit protects the seeds from foraging animals and from fire. In many species the fruits will not open until they have been burnt or completely dried out.

The classic Sturts Desert Pea flower (Swainsona Formosa) is a deep scarlet red on the standard, keel and wings with a black or dark red boss (the enlarged structure at the centre of the flower). Individual flowers are about 90mm long and are borne in groups of 5 or 6. Other colour variations are known including pink, yellow and white. The scarlet form is the floral emblem for South Australia. Forms growing to about 2 metres in height are known from the Pilbara region in north-Western Australia. It is a legume & as such is important for its ability to fix nitrogen in the soil.

The Chrysanthemums  (Asteraceae species) usually used as a cut flower is not native to Australia. They are native to Asia and north eastern Europe. Chrysanthemums were introduced into Japan in the 8th century AD.
The Emperor adopted the flower as his official seal and there is a "Festival of Happiness" in Japan that celebrates the flower. The flower was brought to Europe in the 17th century. The flowers are grown for ornamental purposes.
They are boiled to make a sweet drink in some parts of Asia, called "Chrysanthemum Tea" that is used medicinally to help treat Influenza. In Korea there is a type of Rice Wine that is flavoured with Chrysanthemums. Pyrethrum insecticide is made from a type of Chrysanthemum. Chrysanthemum plants have been shown to reduce indoor air pollution by the NASA Clean Air study.

The park is in the heart of the wildflower country of Western Australia. It lies between the northern sand plain to the west, where an amazing variety of woody heath plants flower profusely in spring, and the arid lands of the Murchison region to the east, where winter rains can trigger a late winter and spring flowering of colourful annuals.

At Coalseam Conservation Park, I believe the coal formed from plant debris, together with marine fossil deposits that were catastrophically buried by a Global Flood. In 1846, the explorers and brothers A C and F T Gregory were looking for suitable grazing and agricultural lands. They discovered coal exposed within the sedimentary layers of the banks of the Irwin River, which enters the Indian Ocean at Dongara. After reporting their discovery, the area was declared a reserve and a number of shafts were dug, but only narrow seams of poor quality coal were revealed.
Coal Beds

Inland from Geraldton in Western Australia. Ellendale pool is a magnificent natural freshwater pool formed by Greenough river and fed by underground springs.It is located near the historic town of Greenough and is surrounded by magnificent Gum trees and a rocky gorge. High in the cliff face you can see pairs of nesting peregrine falcons.

The Quandong (Santalum acuminata or acuminatum) is a particularly good ‘’Bush Tucker” (Australian Aboriginal bush food). The fruit is twice as high in Vitamin ’C’ as oranges. The kernel is high protein and can be eaten raw straight from the tree or roasted.
Emus swallow the fruits, the flesh is digested and the nut passes through the digestive system and is deposited on the ground in a bundle of manure and germinates when the rains come. If there is a long drought and the seeds don’t germinate, the manure pat dries and blows away in the wind leaving the kernels behind. They are sterilised by the sun’s UV rays & from personal experience are quite edible. In fact the flavour is enhanced.

The Greenough  river in Western Australia is dry most of the time, but has a number of permanent pools such as Bootenal Spring. Severe flooding has periodically devastated local farming communities, the worst in 1888: over 50 square kilometres flooded with water over 5 metres deep south of Greenough and the town of Greenough was abandoned.

Green Head in Western Australia is a beautiful little coastal town situated approx. 278km's north of Perth WA and approx.  35km's north of Jurien Bay. It has an abundance of picturesque sandy bays and beaches. Nearby is Stockyard Gully Caves and Mount Leuseur with a diverse range of wildflowers.

The Supervan  in the Kimberley

Our ‘’Supervan” is an Automatic, Diesel, Long wheel base, Toyota HI Ace with constant Four Wheel Drive (4WD). It has a sunroof over the front seats (Which was too hot, so I have blacked it out, but can still use it for ventilation) It has a dual Airconditioning system (front & back).

The vehicle was imported from Japan by WestCity Motors, from whom I purchased it in 2009. I have had it raised by 2 inches & Pedder off road Shock absorbers fitted. I had other modifications done by ‘’All Terrain Campers” in Western Australia.

It now has a Pop-top, Bulbar, Spotlights, Rear Swinging Spare tyre & Water container, Tow hooks front and back, A snorkel, Front & Rear Roof Racks with a second spare tyre. The tyres are off road type on white steel wheels.

We have insect  screens for the windows and we have Curtains all around.
We carry  recommended first aid, safety and recovery equipment, including a pair of  Max-Trax and an EPIRB (Emergency Position Indicating Radio Beacon) and a HiLift Jack & Air Jack.

I have heard it said that man might live for 3 minutes without air, 3 days without water and 3 weeks without food. Apart from trying to hold my breath for three minutes, I 'don't intend testing the others.

If we are facing a life threatening situation & if all else fails, Plan ''B'' is to burn our spare tyres on a bonfire.
Someone is bound to investigate the thick black smoke.

There are more than 800 known species of Australian native orchid and most of these species are unique to Australia. Others are still being discovered.

It is said that the word 'Eucla' was part of a local Aboriginal expression used to describe the first appearance of the morning star over the sand dunes by the sea.  The ruins of the Old Telegraph Station is about 5 km south of the town. At the end of the road there are white sand dunes with a big Gumtree standing above the sand dunes near the partly buried ruins of the Telegraph Station.  Eucla was proclaimed a township in 1885 (there are more buildings hidden under the sand dunes which will, in years to come, be exposed as the dunes are moved by the wind) and was at its most populous in the late 1920s. It declined after 1929 when a new telegraph line was built beside the railway line to the north.

The beaches surrounding Esperance in Western Australia are a brilliant snow white. The waters are a bright aqua blue, changing to deeper, darker marina blue as the coastline drops away into the deep ocean. Blue Have, Twilight Cove, Salmon Bay, Nine Mile Beach, Observatory Point and Lucky Bay are beautiful spots around Esperance.

Jacarandas, (Jacaranda mimosifolia), are spectacular in late spring with their beautiful purple flowers. They are common in many Australian gardens.The Jacaranda is not native to Australia it is a native of Brazil .  Jacarandas along narrow streets can create a tunnel of purple as well as a purple carpet underneath the trees from fallen flowers. Jacarandas are large trees to 10m (30') tall and up to 10m (30') wide with a low, broad branching habit. As well as the commonly seen purple, there are also white-flowering and variegated foliage varieties.