Look at the birds of the air, for they neither sow nor reap nor gather into barns; yet your heavenly Father feeds them. Are you not of more value than they? Which of you by worrying can add one cubit to his stature?

ABOVE: Our Perth suburban front garden with Rainbow Lorikeets in a palm tree. 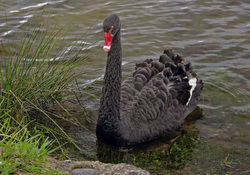 Black Swans are herbivores and eat mostly water plants.The Black Swan  is mostly black, with broad white wing tips visible in flight. The bill is a deep orange-red. Younger birds are much greyer in colour, and have black wing tips. Adult females are smaller than the males.

They are found throughout Australia except in Cape York Peninsula and prefer large salt, brackish or fresh waterways and permanent wetlands, requiring 40 m or more of clear water to take off.
Outside the breeding season, Black Swans travel quite large distances, flying at night (and honking as they go) then rest during the day with other swans.
The Black Swan is a vegetarian eating algae and weeds by plunging its long neck into water up to 1 m deep. Occasionally birds will graze on land, but they are clumsy walkers. Black Swans form isolated pairs or small colonies in shallow wetlands. Birds pair for life, with both adults raising one brood per season.
The eggs are laid in an untidy nest made of reeds and grasses. The nest is placed either on a small island or floated in deeper water.
The chicks are covered in grey down, and are able to swim and feed themselves as soon as they hatch.

There are 3 types:- Black Back - White Back- Western (which normally have mottled backs) Western Magpies are found in the Southern regions of Western Australia. The Black back and white back are found in the rest of Australia, the White Back to the North, the Black Back to the South. Interbreeding has made location lines very indistinct, with the Australian Magpie being one of Australias most common birds.

Common around Uluru in the Northern Territory is the Aralapalpalpa (''Tongu Pump") or Crested Pigeon. They feed on grass seeds on the ground and like most seed-eaters, must drink regularly. Unlike most birds that drink by dipping their beaks and sipping, Aralapalpalpa poke out their tongues and pump up the water. Listen for the metallic whistling sound of their wings in flight. 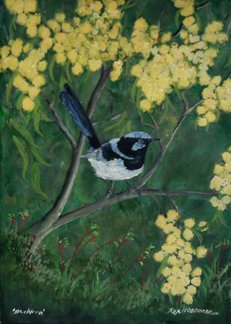 
The blue breeding plumage of the male is often referred to as nuptial plumage.

The non-breeding male is brown with blue in the wings and a bluish tail.


The female resembles the non-breeding male but has a chestnut bill and eye-patch. 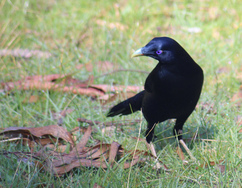 In the Kimberley of Western Australia there is the Western Bowerbird (Chlamydera guttata) The male builds a large bower under a shrub or leafy branch. It is a platform of twigs with an avenue of twigs about a metre long and 45cm high. At each end of the bower it makes a display area scattered with white stones, bones, shells and leaves. The display area of the Bower at the Argyle Homestead has a collection of whitish objects including pieces of white plastic. 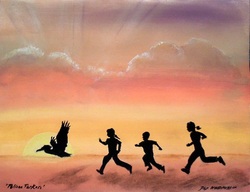 Pelican Parkers by Rex. Pelican & the Parker kids.
The Australian Pelican (Pelecanus conspicillatus) is widespread on freshwater & saltwater lakes, swamps, rivers, coastal islands and shores.  Pelicans are not capable of sustained flapping flight, but can remain in the air for 24 hours, covering hundreds of kilometres. They are excellent soarers and can use thermals to rise to considerable altitudes 1,000m is common. Moving from one thermal to the next, pelicans travel long distances with little effort at speeds of up to 56 km/hour.

Pelicans are opportunistic feeders and eat a variety crustaceans, tadpoles, turtles, fish and if desparate they will eat other birds.
They normally fish together "herding" the fish into a central position, and then plunge their bills into the water and capture a fish with a mouthful of water then "squeeze" the water out by pushing their bill against their chest leaving just the fish in their bill pouch.
They will then turn the fish around in their bill pouch so it goes "longways" down their throat.  With a "jerk" of their head they swallow the fish whole .

The area around Lake Woods in the Northern Territory of Australia, can become a vast flooded area and can support more than 100 000 waterbirds including internationally significant numbers of Plumed Whistling-Duck. The shrubland and wooded habitats provide breeding sites for several colonies of waterbird species including egrets, cormorants, spoonbills & thousands of Pelicans. 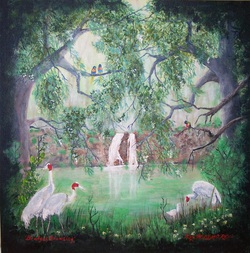 Brolgas Browsing by Rex Woodmore
The Brolga (Grus rubicunda) is a light-grey coloured crane, standing about 1.8 metres high, it has a long, straight bill, long dark coloured legs and a wing span of about 2 metres.
Appearance changes with age.
Immature birds (up to 10 months of age) have a grey, fully feathered head.
Juveniles (11 to 22 months) gradually lose their head feathering and attain a pale orange-red head colouring. Adults have a conspicuous orange-red head, which contrasts with the bare crown of greenish-grey skin and have a black dewlap under the chin. Adult males and females appear similar, although males are larger.

Brolga pairs bond for life and have been known to utilise the same nesting areas for up to 20 years. They are the only crane endemic to the Australian region and tend to migrate between breeding and non-breeding sites. 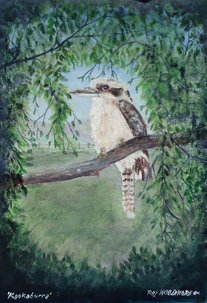 Kookaburra by Rex Woodmore.
Often called the laughing Kookaburra,
they usually laugh  longest in the morning and the late afternoon.
They can  live for 20 years.


A kookaburra's beak can grow up to 10 cm long. It is the largest of the King fisher family.


It was introduced from the Eastern and Southern states of Australia  to Tasmania, Western Australia and to New Zealand.

The Kimberley species has more blue on its wings. 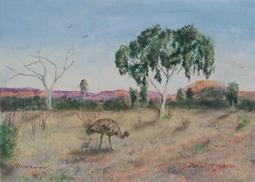 Little Learner by Rex Woodmore
The Emu is  flightless and is the world's third largest bird, up to to 2 metres tall. They have 3 toes, and long legs which allows them to run extremely fast. The female is larger than the male. Emu's feed on grass, leaves and small insects. They live all over Australia in grasslands. The female lays up to 20 large green eggs. The male incubates the eggs for a period of 7-8 weeks, and does not leave the nest for this period. When the eggs hatch, the male emu looks after the hatchlings for another six months.

About the Australian Bustard

The Australian Bustard (Ardeotis australis) also called the Plains Turkey or Wild Turkey. They were a popular food source (Bush Tucker) for both the traditional Aboriginal land owners and the early European settlers.

The budgerigar (Melopsittacus undulatus) is a small, usually green, Australian nomadic parrot that survives in very dry areas by following thunderstorms. After rain in areas that are usually dry, budgerigars may descend in huge flocks.
Budgerigars do not breed in desert regions but feed upon the desert grasses, like Spinifex (Triodia species). It has been estimated that an average of 80% of water in the desert come from thunderstorms. When fed by rain, seasonal desert streams & waterholes provide an ideal breeding habitat for budgerigars.
The rain enables the growth grasses and of Red River Gum  trees (Eucalyptus camalduslensis) which are particularly suitable as nesting sites. Nests are in hollow branches which are common in the Red River Gums. In captivity, as a result of selective breeding, there are at least thirty-two known primary  colour variations of Budgerigars.