THE DEMISE of THE GILT DRAGON

The Demise of The Gilt Dragon by Rex Woodmore 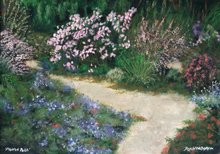 Planted Path by Rex Woodmore
A poor lady on the street.
Once she was pretty, life was sweet.
Now all she has is her sweet dreams.
These are her thoughts,( or so it seems ).
Oh! to own a little  home. To own a garden too
With Geraniums & Pelargoniums & garden gnome or two.
​ 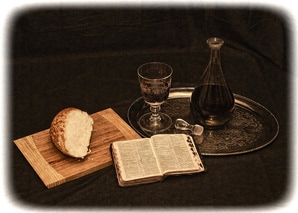 When I was a child, I spoke as a child, I understood as a child, I thought as a child; but when I became a man, I put away childish things.
For now we see in a mirror, dimly, but then face to face. Now I know in part, but then I shall know just as I also am known.

And now abide faith, hope, love, these three; but the greatest of these is love.
Who would have thought, I would survive this long?
I’ve taken so many risks, and I’ve done so much wrong.
Those, who knew me in the past, very well,
Could embarrass me with stories, they might tell

When I go, I know where I’m going, & who I will see
For I have faith, and believe what my God, tells me
My belief, is not a dead end, in an empty space
I believe, where I go, there is the glory of my Saviour’s face

I didn’t always, understand what I now know is true
Mysteries that are understood by only a blessed few
I’m not boasting about anything special in me
Only what God has done, in changing me

I’m no handy-man; ask my wife if it’s true
There are lots of simple things, I just can’t do
And I suppose, viewed through some people’s eyes,
There are those, who would say “He never tries!”

There are many things, I just don’t understand.
Yet God has done wonders, with this simple man
God has touched my mind & touched my heart
Through His wondrous Creation, He taught me art

As a schoolboy my lessons were never learned
And yet truth and knowledge, I always yearned
There were those who said “He’s not very bright’’
But perhaps the time………. was not quite right

As a boy had I learned to embrace the wisdom of man
​ It may have hindered, what for me, God had planned.
I know I am far from perfection. It’s a cliche, so they say
​ ‘I’m a work in progress, but I’ll get there someday 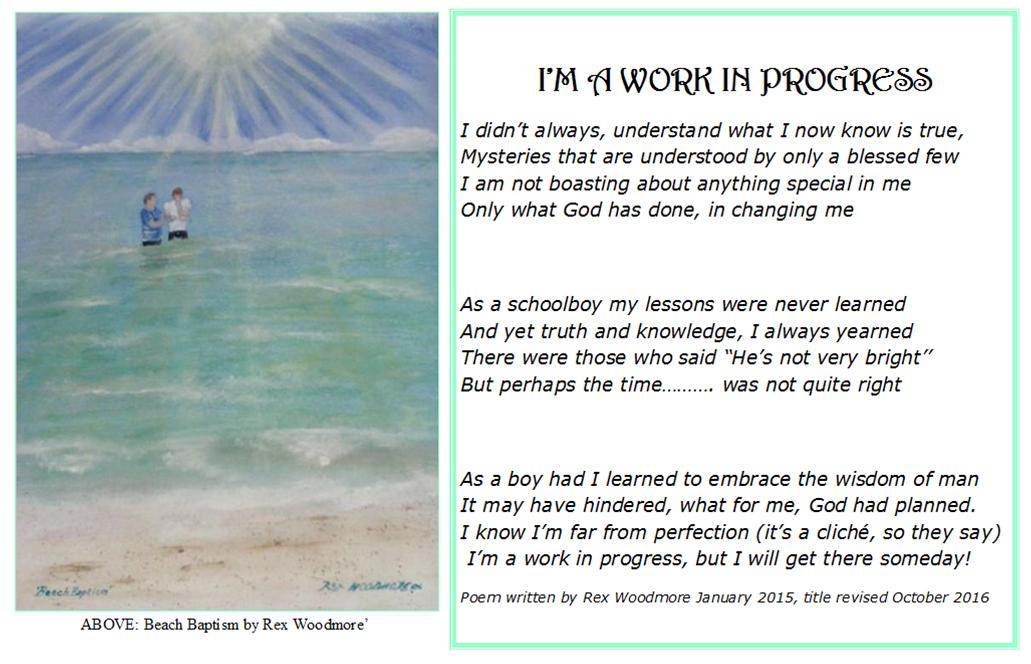 I find inspiration for rhyme can come at almost anytime.
A gift?
Or perhaps a quirk, but whatever, a poem always lurks.

Working, or taking my time, my thoughts are often in rhyme.
I pick up a pen & words I put down, on paper, plain, lined or brown.

Scribbled memories, thoughts, ideas, some with laughter, some, with tears.
I used to write what I perceived, as spiritual things, dreams, crystals & angels wings.

With ‘New Age’ notions & alcoholic potions clouding my mind, I wined & dined.
Craving answers, I turned to the East , but discovered, ‘tis the way of ‘The Beast’.

Meditation & myths of monks & their kind, kept me from truth & kept me blind
I found monks kind, I thought them wise, but all I was taught was someone’s lies

Monks speak of many paths, but where was mine?
It was ‘the blind leading the blind’ The path of the lost & no truth to find,
yet eternity was written - contract not signed.

I’m sure the angels witnessed, with a laugh “He tried to plan his own path.
But he is only a fallible, mortal man. He can not bend our Master’s plan”.

Then a lady, an acquaintance, who told no lies, quoted me biblical words, so wise.
With help from this lady, my Christian guide, a glimpse of the path, of truth I spied.

Today no longer in darkness, I walk in light. The Spirit within, has granted me sight.
And I am blessed by The Great Might,  to be on this path that I know, is so right.

Now my inspiration is from God above and I’m able to write, with authority, on love
For I am twice blessed - born again to new life with my guide by my side, as my wife. 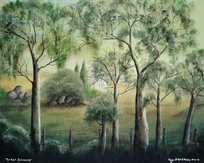 Green Grounds by Rex Woodmore
Yes he was guilty he did the crime
For that guilt he did the time.
He deserved it, (this he doesn't deny),
He said “I deserve to die”

But was it fate that lent a hand?
Instead of dying, sent to Van Diemen’s Land
Far, far across the open sea.
His companions, all rogues & thieves
Demons, murderers, (but none worse than he),
Some sick, faint or diseased.
Many lost, with hearts that failed,
On those seas that now, many have sailed.
He’d led a life of ill-gotten gains
A path into strife & now these chains.
He worked in irons, his clothes were rotten.
He cried to God, (whom he had forgotten).
Many a tale he could tell of boot, whip & rod,
For he walked where the ‘now dead’ once trod.
He was to his captors what they wanted him to be.
He earned a pardon that set him free.
He cleared & fenced & cropped the land
He paid his taxes on demand.
He built a house, a stable. A store,
A shop, a tavern, a hall & more.
He built a town, with school & worship place.
He employed & paid a teacher, a doctor, nurse & preacher.
On Sunday he would listen to that Godly man,
Preaching from his pulpit stand.
With no robes, no statues. Just his bible in hand
His sincerity, respect, would demand.
Hearing this teaching, from the holy word,
Was something our man had not before heard.
As he listened, at peace, a change began.
It dawned on him God’s grace he could understand.
‘Twas not fate that brought him to Van Diemen ’s Land
‘Twas God’s sovereign plan & mighty hand.

100 years later on his tombstone we see:

'Now as you read this on my slab of marble
At our Lord's Love & grace, you can marvel!
For now, I am a free man, I'm truly free!
I'm in the Glory & free for Eternity.

THE MAN AT THE DOOR by Rex Woodmore

Every Sunday... he’d greet us with a smile.
He hasn’t been at a meeting... For.. quite awhile
Yes...many will miss the man at the door
That wonderful man.. who was here before.

A bloke could expect to be welcomed.. like a long lost mate
With a sincere greeting... & a firm.. hand shake.
And he always was... such a gentleman to the ladies
And so caring... towards children & babies.

….Alan Jordan.. was the man at the door.
Sadly... he’s gone...but will suffer.. no more.
At last our brother, we called ‘The Man At The Door’
Has been called home by our Lord who says “I am the door..

If anyone enters by Me, he will be saved ”  (John 10:9)
So…today….let us be grateful & offer our praise.
At the same time as sharing our grief & sadness
We celebrate.. Alan’s ‘Graduation to Glory’ ...with gladness. 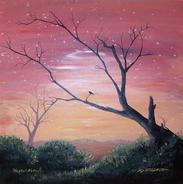 
​SUCH VASTNESS, .…INCOMPREHENSIBLE, TO ONE SUCH AS  I.. IN AWE AM I.  SO INSIGNIFICANT
& WORTHLESS I STAND, BENEATH THE CANOPY OF THE WORLD, THE AWESOME  NEVER ENDING SKY.


​​YET TO OUR CREATOR, PERHAPS ONLY A SMUDGE OF HIS MIGHTY HAND
OUR WONDROUS GOD KNEW, IN HIM I WOULD COME TO KNOW & TRUST.
HOW HUMBLED & PRIVILEGED I FEEL, THE KING OF KINGS KNOWS ME!
WHY ME? I AM BUT A WORTHLESS WORM SQUIRMING IN THE DUST.

YET, BEFORE THE FOUNDATIONS OF THE EARTH, BY NAME HE KNEW ME.
TO BE CALLED TO MY ETERNAL HOME, IN GOD’S TIME, I CONFIDENTLY AWAIT.
I FEAR NOT THAT BLESSED DAY (THE BLESSED DAY I DIE).
NO MAN HAS SEEN HIS GLORY, (‘TIS TOO GREAT!)

Oztreasure Treasure Hunting in Australia & Beyond

Satan Knows His Own Rex Woodmore.

Painting by Rex Woodmore
When death will strike no one knows
What is important is where one goes.
By his fruits you shall be known
And Satan knows his own.

This man hadn’t been unwell or sickly
Yet his death came upon him quickly
He was a Man of the world, called by name
Now he faces darkness lit by flickering flames

Skin stinging and red eyes strained
He reviews his life, with pages stained
His every sin, recorded there.
Regrets! Regrets! he tares singed hair.

Screams stifled to a lonely groan
As heat sears down to bone
Sickening odor of flesh on ash
His tongue he chews, his teeth gnash

Once he stood tall, owning things of the world
He’s lost it all. Moaning & fetal he’s curled
There he lays too pained to yell,
Too late! To pray, for this is Hell!

Why? Why? Oh why?
Why does anyone choose this fate?
When our Good Lord’s redemption awaits

‘BELIEVE ON THE LORD JESUS CHRIST and BE SAVED’ Rex Woodmore